It was great to see MIP Alumni Christian Karembeu, Nuno Gomes and Eric Abidal take part in the successful Match for Solidarity game in Geneva. There was also additional MIP representation in the form current students in the form of Gaizka Mendieta and Youri Djorkaeff.

The match which was watched by over 23,000 fans was full of quality and saw Luis Figo’s team finish 4-3 winners against Ronaldinho’s team with goals coming courtesy of Raul, Robert Pires, Michel Salgado and of course, our own Nuno Gomes.

This star-studded affair which saw the teams managed by the legendary figures of Carlo Ancelotti and  Didier Deschamps respectively, was a match which aimed to promote peace, human rights and well-being in the world, through the Sustainable Development Goals set out by the United Nations. In addition, to the match there was also a charity dinner and a digital football auction with all funds going towards the UEFA Foundation of Children.

To read more on this charity match click here: 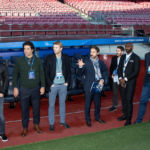