FC Barcelona announces that Robert Fernández will not extend his contract as the football first team technical secretary which runs out on 30 June of this year. The Club would like to thank Robert Fernández publicly for his commitment and dedication to FC Barcelona over the years and wishes him success in the future.

As such, FC Barcelona also announces that Éric Abidal will take over the role as football first team technical secretary. His official presentation will be on Monday 18 July.

The former French international is no stranger to overcoming obstacles in life as he battled cancer during his time at FC Barcelona. In 2011 captain Carles Puyol made the grand gesture of allowing Abidal to raise the Champions League trophy at Wembley in the midst of his recovery and in 2013 he overcame the return of the illness to lift the league trophy under coach Tito Vilanova.

Since his departure as a player Abidal has maintained strong links to FC Barcelona. He has been heavily involved in the activities of the Barça Foundation and has turned out for the veterans’ team, Barça Legends. 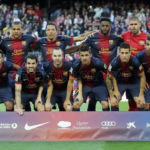