Our network is expanding at MIP Alumni and that is a testament to the desire of the footballing community to protect and enrich the future of the sport. In continuing to educate, inform, and inspire the sports industry at large, we hosted the inaugural MIP Alumni Association conference in 2021 to glean expertise from a “who’s who” list of sporting excellence.

By drawing on their own experiences within the world of football administration, analysis, and management, our guest speakers from across the world of football offer professional insights into the role of the sporting and technical director, the changing face of the women’s game, and how players can best prepare themselves for a career in football post-retirement. 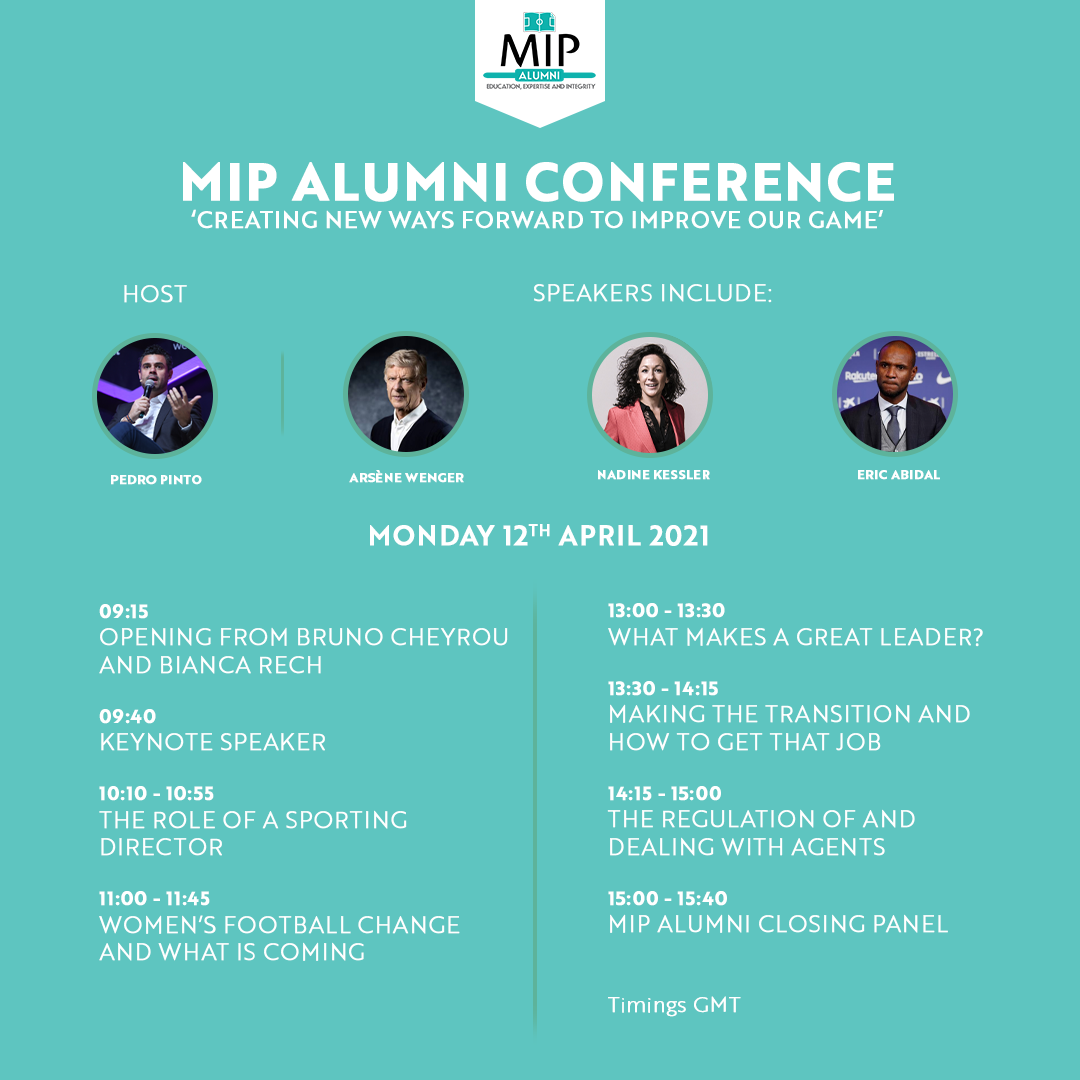 ‘A good leader is a guide’: Five takeaways from the inaugural MIP Alumni conference

Some of the biggest and brightest names from the world of football joined MIP Alumni’s inaugural 2021 conference on 12th April 2021 as thousands tuned in to the live event via the association’s official Twitter channel. With a focus on growing the game, top executives including Arsène Wenger, FIFA’s chief of global football development, and Nadine Keßler, UEFA’s head of women’s football, spoke of the sport’s shared responsibility to educate football’s future leaders. Let’s take a look over five key takeaways from the MIP Alumni conference and where the biggest opportunities lie for professional footballer’s who wish to continue making a difference within the beautiful game beyond their playing careers.

Wenger, who joined football’s global governing body FIFA following his managerial career, notably with Premier League club Arsenal, emphasised the importance of education in a young footballer’s life and how learnings during their adolescence will help them to carve out a career post-retirement.

“In our education of tomorrow’s football player, we really have to take care of that education between 12 and 20 years old before they go into a [playing] career and to help improve their level of education because I personally think it’s important that they take charge of football,” Wenger said. 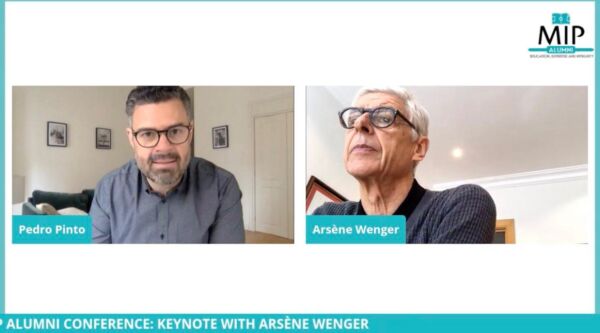 Arsène Wenger with the opening keynote

“A good leader is a guide. That means that they need to have a global concept of what they want to do and means that, overall, you have to give people clarity of where you want to go and you are capable to verbalise and transform that into concrete exercises and daily behaviour.

Since becoming Aston Villa’s first sporting director for women’s football in January 2020, former England international Eniola Aluko said that she has faced challenges when trying to persuade strategic changes within the FA Women’s Super League (WSL) outfit and turning the women’s team into a professional setup.

“Even my appointment, in itself, was a massive change,” she said. “I represent change to a lot of people who have been at the club for a long time. For me, that has been the most difficult period because it can be very lonely if people are not open to change. You can’t manage change until people are open to hearing a strategy for change.

“That period of trying to convince people that this is the way forward is always the most difficult. I have found it difficult to convince people who have frankly benefitted from how it was before … and the way you convince them is through results, through seeing things positively change, but the key is having people around you who are open [to change].” 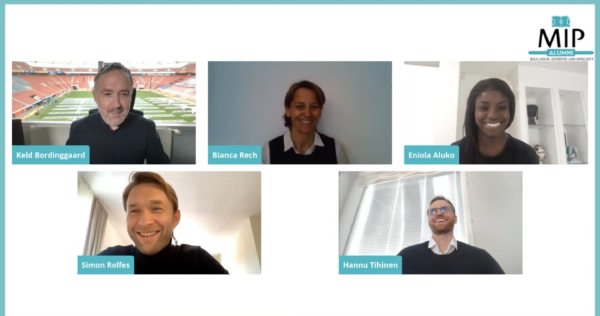 Keßler, who is also a former German international, and the 2014 FIFA World Player of the Year, added that the women’s game will only continue to flourish as more teams, leagues, federations, and players embrace the professional era.

“What this game stands for, what the players stand for, and how far football has come is tremendous,” she said. “In my playing days, I really disliked the fact that there were many things being discussed besides to the actual football. As an athlete, that’s the thing that you want to be measured for. I am so happy to see that the game has taken off technically, physically, tactically and that those girls are showing how good they can be if they are given a professional structure to drive them.” 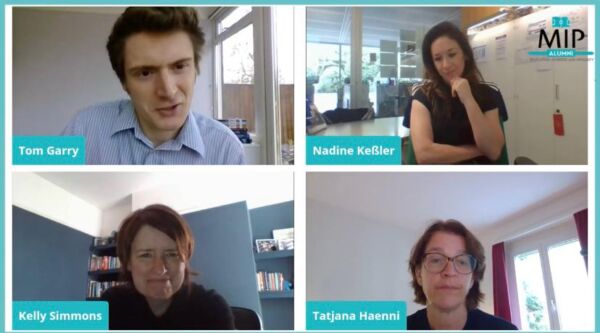 With several players now leading their own contract negotiations, such as Manchester City star, Kevin de Bruyne, and teammate Raheem Sterling, who is setting up his own football agency, agents are being urged to educate themselves around player values.

Among the conference’s commentators, former Cameroon international, Geremi, who was appointed in 2017 by football’s global players’ union FIFPro, called on FIFA to restore agent regulations to empower players losing trust in their representatives. 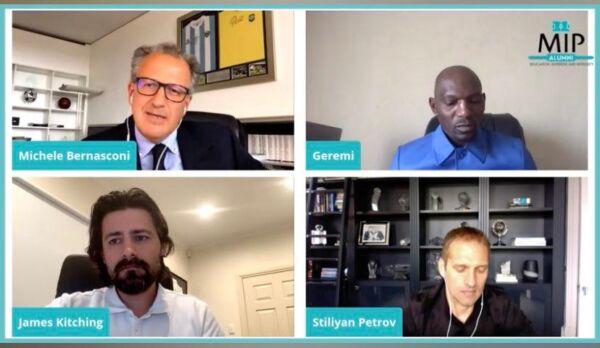 Michele Bernasconi, James Kitching, Stiliyan Petrov and Geremi speaking in ‘The Regulation of and Dealing with Agents’ session

“What we have realised today is that there are a lot of agents who are not doing their jobs, which is not good for the career of the youth player,” Geremi said. “Therefore, I think it’s important for FIFA to regulate and to bring some proper regression to that job, otherwise there will be some young footballers who do not realise their dreams.

“In the football industry, footballers are the main product [and], from a footballer’s perspective, it is important to work with a good agent,” Geremi added. “An agent who is well-educated, well-qualified, and has integrity, those have a big role to play in this industry.”

4. Build team culture from within

It has been four years since Andrea Radrizzani took over ownership of English football club Leeds United. In that time, the Italian businessman, who also founded the Aser Ventures investment firm and Eleven Sports broadcaster in 2015, believes the club’s promotion to the Premier League in 2020 was borne from a cultural change.

“When I arrived at Leeds, I found a club that was really, in a way, in a ‘spirit’ crisis,” Radrizzani expanded. “Everybody was feeling passive and couldn’t see the light. So, the first thing I wanted to do was set the values of the club and the five words that represent the club. They are: ‘ambition’, ‘pride’, ‘family’, ‘graft’, and ‘innovation’.

“These five words and values have been at the centre of all of our activities during my life at Leeds United. What we achieved during this time is changing the culture of the team and the club itself, which was probably the biggest objective, so that, through that cultural change, we could then achieve success on the pitch.

“It is very important for a leader to be able to delegate; to be able to choose people with whom you can still check on their job without being invasive; someone you give trust, enforce your leadership, and who can grow your culture within the club. The only way to do that is to pass this to the people and the people who you trust, including the chief executive, the director, the coach, and also the captain.”

@andrearadri Owner of @LUFC and Chairman and Founder of Eleven Sports shares an insight into creating a thriving work culture. #MIPAlumTalks pic.twitter.com/olZsUScdNS

5. Choose your own path

Former FC Barcelona defender and executive Eric Abidal, who was the Catalan giants’ sporting director between 2018 and 2020, says the club’s in-house education programme inspired him to seek a career in football post-retirement, adding that the biggest challenge for players is deciding on which area of the game they want to serve.

“When I moved to Spain, I joined a club – FC Barcelona – where, internally, they have an education programme for players,” said Abidal, who also played 67 times for France. “In 2015, I was a UEFA ambassador and, at this time, I realised that I have to train myself, to know more about the global aspect of football, and to prepare myself for the future.

“It was not easy because, first, you have many doors opening for you, for a new position, but you are also scared about your skills, about your knowledge, and sometimes you have some doubts. It is better to take your time, to prepare yourself and to study, because as a player you can travel a lot and know many things about the game, but behind the game you have … to analyse all the situations.

“The easy way is to work in a club where you spend more time, where you have comfort, and you are not putting yourself in trouble, and is maybe a better situation. Many of the players doing the UEFA MIP [education programme] know that is the best way to train yourself and to open their mind to more information and, after that, to make a decision on where they want to go.”

To view all of the recorded sessions from the inaugural MIP Alumni Association Conference, subscribe to MIP Alumni’s official YouTube channel. Click here to find out more about the UEFA MIP Programme.